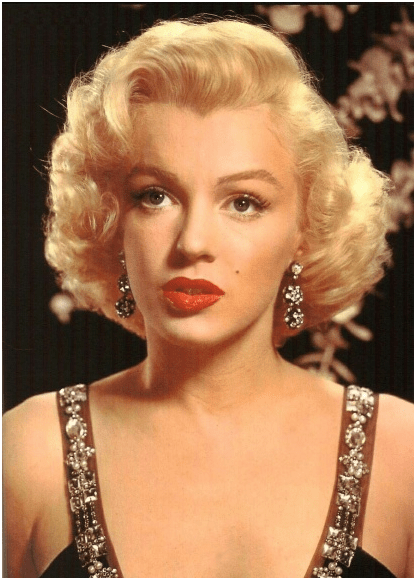 One of the charismatic actresses of all time is Marilyn Monroe. Her cult verges on the incredible. Her life off the camera was more intriguing than her life on the studio set. Her untimely death at the peak of her career was the subject of speculation by the world media. In this article, we will assess the factors which catapulted Marilyn to the height of glory, the uncertainties that ruled her personal life, the reasons for her wayward family life, and the causes for her sudden exit from the world, when she was at the peak of her career.

Norma Jean Mortenson (popularly known as Marilyn Monroe) was born in Los Angeles, California, at 09.30 A.M. on June 1, 1926. When Marilyn was born, her mother was mentally unstable and financially incapable of taking care of her daughter. Marilyn was brought up by her foster-parents, Albert and Ida Bolender of Hawthorne, California. Even the Bolender home did not turn out to be permanent. Marilyn lived in several foster homes, including the Los Angeles Orphans’ Home. Two weeks after she turned 16, Marilyn got married to James Dougherty. This marriage was fixed by her guardian Grace McKee so that Marilyn need not ever return to foster care. Marilyn married James Dougherty on June 19, 1942.

The main factors which curtailed happiness in Marilyn’s childhood were:

The yoga for becoming an adopted child is clearly explained by the late J.N. Bhasin in Hora Shatak: “If the lord of the 6th house aspects the 2nd house and its lord and 2nd lord is in 6, the chart holder is given in adoption” (Hora Shatak, Verse 51). Bhasin’s principle is that anything “foreign” to a chart is

indicated by 6th lord and the 6th house. One gets separated from natural parents and lives with foster parents due to the presence of 6th lord in the 2nd house. This rule is partly satisfied in Marilyn’s chart.

Marilyn had no siblings. The third lord, Mercury who rules younger siblings is combust and aspected by Mars from the 8th house. The eleventh lord Venus is in the undesirable 10th (being twelfth from its own house) and afflicted by Saturn’s aspect.

Marilyn was famed for her beauty. In Marilyn’s chart, the Moon as Lagna Lord aspects Lagna. Further the lord of the sign, occupied by Ascendant lord is exalted, thus giving rise to the Parvata Yoga. This yoga is eulogized by Mantreswara in Phaladeepika, when he says “A person born in Parvata Yoga will have unlimited wealth, perpetual gains and happiness; the chart holder will have sovereignty over the earth” (Phaladeepika, chapter 6, verse 36)

The American Film Institute in 1999 rated Marilyn Monroe as the sixth greatest female artiste of all time. A 26 foot tall, 36000 lbs sculptural tribute to Marilyn’s iconic scene from The Seven year itch is now on display at Palm Springs, California. This statue attracts many tourists, which gives an idea of Marilyn’s everlasting appeal.

Marilyn Monroe’s chart is studded with yogas, some of which we shall analyse here:

1) AMALA YOGA: This yoga arises out of placement of a benefic in the 10th house from the ascendant or Moon. A person born in this yoga is virtuous, pious, kind, fortunate, cheerful, affable, honoured by the state, gentle, soft spoken and wealthy (Phaladeepika, Chapter 6, verse 12).

2) SASA YOGA: In Marilyn’s chart, this yoga arises out of Saturn’s placement in a quadrant in Libra. The chart holder of Sasa Yoga will receive praise, will have faithful attendants, will be a king or queen (Ibid, Chapter 8, Verse 4).

3) MAHABHAGYA YOGA: With Ascendant , Sun and Moon in even signs, this yoga arises in Marilyn’s chart. A girl born under this chart will become fortunate and wealthy (Ibid, Chapter 6, verse 15).

Marilyn’s marriage on June 19, 1942 with James Dougherty took place in Rahu Dasa and Ketu Bhukti. Saturn as 7th Lord aspects Ketu, and Ketu becomes a powerful significator of marriage. Rahu in the 12th house (house of connubial happiness) also signifies 7th house due to the application of the Sani vad Rahu rule. This marriage ended in divorce on September 13, 1946. (James Dougherty did not attend Marilyn’s funeral in August 1962, although he condoled her death). The divorce occurred in Rahu dasa, Sun bhukti with the concerned planets being natural enemies apart from occupying in 2/12 axis in both Rasi and Navamsa, thereby becoming functional enemies as well.

On January 14, 1954, Marilyn married Di Maggio and immediately travelled to Japan combining her honeymoon with a business trip. At the time of marriage Jupiter was in Taurus aspecting 7th house from Lagna, thereby indicating second marriage. While in Japan, Marilyn is reported to have said, “Marriage is my main career from now on”. She then travelled to Korea alone, where she performed in front of 13000 American marines. This marriage ended in divorce exactly 274 days after the day of marriage. In 1954, Marilyn was running the conjoined periods of Jupiter and Mercury, both planets under the influence of a badly placed Mars. Further Mercury as 12th lord, placed in the 8th from Saturn (lord of marriage) could not have saved her marriage. Unlike the other two husbands of Marilyn, Di Maggio never spoke a word about his wife in public, wrote a tell-all or remarried.

On June 29, 1956, Marilyn married playwright Arthur Miller. Although brought up as a Christian, Marilyn converted to Judaism before marrying Miller. This turned out to be the longest of her three marriages, ending in divorce on November 11, 1960. Her third marriage took place in Jupiter Dasha, Ketu Bhukti. It is worth reiterating that her first marriage also took place in Ketu bhukti and the key role of Ketu in getting Marilyn married is mainly due to Ketu becoming a significator of marriage by receiving Saturn’s aspect. The couple divorced in Jupiter dasha, Sun bhukti, with the Sun in the eighth from Saturn (lord of marriage), becoming both a natural and functional enemy of Saturn, simultaneously. None of her three marriages could give children to Marilyn. Mars as the Lord of 5th and Jupiter as the Lord of 9th become powerless in the 8th house. Mars as the Lord of the 5th house is in Mrita Avasta (state of death), whereas Saturn as the sign dispositor of Mars is also in a similar state.

Marilyn’s phenomenal growth towards becoming an actress of international renown could be attributed to the strength of her Dasamsa chart. In the D-10 chart, the Lagna Lord conjoins the 11th Lord Moon and 9th Lord Venus in a spectacular 3-planet conjunction in the 9th house. Jupiter, Mars and Venus occupy their own houses, while the Moon is exalted. Saturn in the 11th is not only well placed, but also in a trine from Jupiter. Consequently Marilyn had a meteoric rise in Jupiter dasa, Saturn bhukti that operated between 1951 and 1954.

On June 1, 1952 she bagged the role of Lorelei Lee in Gentlemen prefer blondes; On November 1, 1953 How to marry a millionaire was screened. The seven year itch was screened on June 1, 1955. By the time Saturn bhukti (in Jupiter dasha) ended, Marilyn had climbed dizzy heights in her career. All these movies turned out to be blockbusters.

In 1959 she scored the biggest hit of her career starring with Tony Curtis and Jack Lemmon in Billy Wilder’s comedy Some like it hot. Marilyn won the Golden Globe award for Best Actress for this movie. Venus in the 10th in Rasi chart and in the 9th house in the D-10 Chart was sure to propel Marilyn to an iconic level, given the fact Venus is karaka for fine arts.

Before the shooting of Something’s got to give resumed, Marilyn was found dead in her Los Angeles home on August 5, 1962. Her death happens to be one of the most talked conspiracy theories.

At the time of her death, Marilyn was in Jupiter Dasha, Mars bhukti and Ketu Anthra. Jupiter in the 8th house from Lagna and in the 2nd from Moon could be said to be a first rate Maraka and the same is true of Mars. Ketu aspected by 7th Lord Saturn is also a Maraka.

We will now discuss the astrological factors for her untimely death. Saturn as 8th Lord appears stronger than the Lagna lord Moon and therefore the chart falls in the Madhyayu (middle life) category. The quadrants have two malefics, viz., Moon and Saturn, while Venus, the singular benefic in a quadrant has kendradipathya dosha. Technically speaking, Jupiter in 8 indicates long life, whereas the Mars–Jupiter conjunction in 8 affects longevity.

For Marilyn, the second cycle of Sade-sathi (7.5 year cycle of Saturn) operated from February 8, 1958. On the day of her death, Saturn was approaching her natal Moon, separated by just 12o. Both Saturn and Ketu were in Capricorn, on the fatal day, which happens to be Marilyn’s Moon sign. Saturn being the 8th Lord in Marilyn’s chart becomes a powerful indicator of death especially, while in its passage over the natal Moon, technically called the Sade sathi.

Marilyn was quick to befriend men and once a relationship was established, it was bound to end in acrimony. Marilyn’s temperament could be judged from the position of Mars, Venus and Saturn. She had no control over her passions, which could be seen from the mutual aspect between Saturn and Venus, with Venus in a Martian sign. Marilyn used to say: “Imperfection is beauty, madness is genius and it’s better to be absolutely ridiculous than absolutely boring“; she truly lived up to her view.

Men in Marilyn’s life did not last long, since Marilyn’s approach to life could not match that of any one of them .They entered Marilyn’s life in the hope that paradise awaited them, but only to find their hopes shattered soon. Their lives enliven Sri Krishna’s teaching in Bhagwad Gita (Chapter 18, Verse 38)

The veracity of the maxim laid down by Bhartrhari in Sringara Satakam in lighter vein is also proved by the men in Marilyn’s life.

“There are physicians and medicines to save a person from the bite of a cobra, but there are no physicians or drugs that could save a person bitten by the glance of a damsel” (Sringara Satakam, verse 54).

In essence, Marilyn was destined to live alone, which was partly her own making. Absence of love during her childhood created a sense of instability in her life. Marilyn had none to associate with, be it father, mother, brother, sister, husband, son or daughter. Marilyn’s life exemplifies the dictum that the position of planets in a person’s natal chart has the power to either make or mar the life of a human being. In an overall sense Marilyn’s life turned to be one similar to the proverbial curate’s egg (an indeterminate mixture of good and bad).